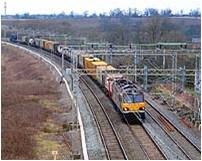 A goods train from Beijing arrived in Hamburg on Thursday after having crossed six countries in a journey organisers said could ring in a new era of rail transport between Asia and Europe.
The “Beijing-Hamburg Container Express” left the Chinese capital on January 9 with its cargo of shoes, toys and electronic goods and covered the distance of 10,000 kilometres (6,200 miles) in 15 days, Germany’s state-owned rail operator Deutsche Bahn said.
The company’s logistics chief, Norbert Bensel, said the inaugural journey on the new rail route had delivered its cargo in roughly half the time it would have taken to arrive in the northern German port city by sea.
The sea journey takes about 30 days.
“The test train was a success. We have demonstrated that we can transport goods by rail between China and Germany safely, reliably and yet twice as fast as compared with ships,” Bensel said.
“At the same time, we are considerably cheaper than air freight for many types of cargo.”
The “Container Express” made its way from China to Germany through Mongolia, Russia, Belarus and Poland.
It is the brainchild of Deutsche Bahn chief Harmut Mehdorn who wants to improve and increase rail transport between Europe and China as the Asian giant establishes itself as a vital trade partner for the continent.
Mehdorn said administrative cooperation with the transfer countries needed to be finetuned and infrastructure improved, but he believed that “by the end of the decade we can aim at launching regular freight transport services along this axis.”

What's your definition of supply chain?